How's that webby thing workin' for ya?

It's been only a year since I wrote up my early impressions of working with a Chromebook. I was giving it a serious chance, because there were so many things to like -- simplicity, convenience, security. And I tried to stick with it partly due to the dangling carrot of being able to run Android apps on it someday -- a carrot that so far continues to recede in front of my nose.

But in the end I'm signing off. I bit the bullet and replaced it with a Dell XPS 13 running (initially) Windows 10 and (soon coming) Linux. Not till I dived into the new machine did I really appreciate how much I'd been chafing under the restrictions of Google's webcentric tool.

After my initial disappointment at not being able to take full advantage of Dropbox, I used Zoho for writing until I ran into too many sync issues and formatting questions. Once I had to resort to restoring an earlier Dropbox copy when my latest edits failed to save. Bad!

Plus, if I used LibreOffice to open one of the documents that I'd edited in Zoho, it would ask me if I wanted to use Open Document Text format when I saved it, revealing that Zoho's ODT was somehow not the same as LibreOffice's. One of the ODT viewers on my phone and tablet would refuse to open the files, too, probably for the same reason. Not good.

When Even Linux Fails

Then I lost my ability to boot up the Crouton version of Linux. It simply stopped working after a Chrome update and I was unable to get it to run again. This revealed what a weak link in the chain this solution is. It's too small a project with too few developers to make it robust. Unlike a  normal Linux distribution that will install on practically everything from a Raspberry Pi to the largest super-computer, Crouton is at the mercy of the underlying Chrome platform which may shift without warning. And it's not possible (at least at my skill level) to do a true dual-boot installation of Linux due to the way Google has locked down the platform. It's almost like trying to install it on a Mac. 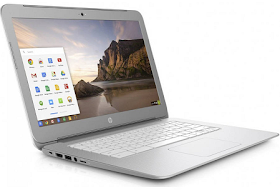 Add to this the minor annoyances, like having to buy a third-party app to be able to access my remote desktop at work, and the non-standard keyboard missing the delete, pageup and pagedown keys. And that's worse than it sounds when you're used to using them to jump around and edit lots of words.

I started to ask myself, if Microsoft tried to sell me this (like their RT version of Windows for netbooks on Arm processors), would I bite? And the Chromebook limitations go much further than the ones on RT.

Then there's the issue of planned obsolescence. Google put out the word that they will only guarantee support for 3 years after a Chrome device was first introduced. Too bad if you made your purchase two years into the product cycle. I've never liked the way Mac hardware becomes day-old toast every year when the new models come out, and this rubbed me the same way. Down here on the street, we are right to expect a five to seven year life cycle to our hardware. My wife is still happily using an HP laptop from 2011, and the end of its life might be the eventual demise of Windows 7. Even then there could be a lightweight Linux distribution in its future.

The final decision came when I realized I was thinking about replacing the Chromebook with a higher end model from Dell that was going to cost about as much as the XPS laptop. For the same money, it was a no-brainer.

The Plunge and the Future

So I've plunged back into the mainstream. Ahh ... 128 gigs of solid state drive instead of 32, eight gigs of RAM instead of four, a standard keyboard, illuminated even, a Dropbox that works again, and the full version of LibreOffice at my beck and call.

The idea of running everything from the web -- like the ancient days of client/server computers and terminals -- is still an interesting one, and it will probably continue to evolve and improve. Google has promised that all new Chromebooks will be able to run Android apps (though maybe not older ones like mine), which will make them a lot more useful. Beyond that, they're developing a whole new operating system (yikes!) that proposes to merge the features of Chrome and Android and eventually run on all devices including desktops.

From the other end of the spectrum, Microsoft is pushing Windows to become ever more mobile and webcentric. Soon they will collide in the middle. But I'm not sure I'd put my money on Google in this confrontation. One of the advantages of both Android and Chrome is their reliable Linux foundation. If Google throws out that baby with the bathwater then they may find themselves sailing on a ship as leaky and fraught with bugs as the SS Windows.

But to me it's all about striking the right balance. It's wonderful to be able to open a Dropbox folder anywhere and have my files available. Not wonderful when they're inaccessible because you're offline, or when you can't edit them because your software is also online.

So much computing power can be put into such a small package now that there's no reason not to do most tasks "locally" while mirroring data to a cloud resource. Right now that's the best of all possible worlds, regardless of your platform of choice.

Speaking of platforms, I'm even having some fun with Windows 10. But that's for another day.